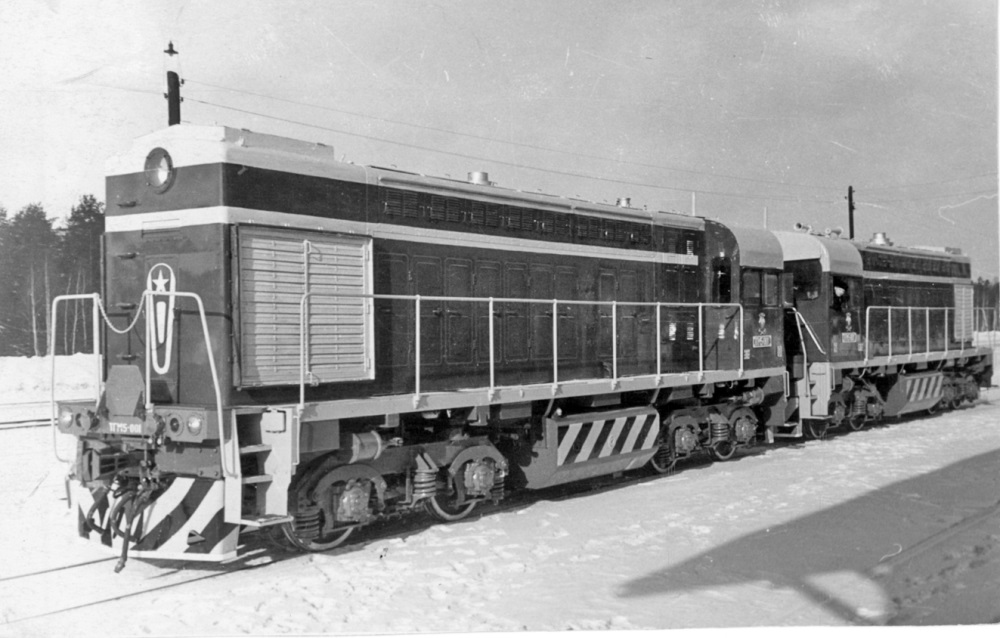 The TGM5 locomotive is an experienced eight-axle two-section diesel locomotive with hydraulic transmission, designed at the Lyudinovo Diesel Locomotive Plant.

By the end of 1964, the technical design of a universal diesel locomotive was completed at the Lyudinovsky Plant under the leadership of the chief designer AM Khrychikov. The single-section diesel locomotive was designed for train and light shunting work, and in two sections, for heavy shunting work. The diesel locomotive could use three types of diesel engines: M756, 4D49 and 6D70; adhesion weight of one-section variant could be 68, 74 and 76 tons; coupling weight of the two-section variant when additional lining: 2 x 80 and 2 x 88 tons. It was possible to obtain 18 modifications of the locomotive. When designing the locomotive, parts and components of the TGM3 series locomotive were widely used. For the construction was chosen two-piece version with 6D70 diesel engines. In early 1966, the Lyudinovsky Plant built an experimental locomotive, designated TGM5-001, sections A and B.

Each section of the locomotive had a bonnet-type body and one driver’s cabin. The body frame rested on two two-axle bogies through eight side supports (four per cart). The bogie frame was suspended from the balancers through end coil springs and supported on leaf springs through sets of coil springs. Balancers relied on axle boxes, similar in design to axle boxes of the TE3 series locomotive. Diesel 6D70 of the Penza diesel plant was installed on each section of the locomotive. The diesel engine had a gas turbine supercharging with charge air cooling and at a crankshaft rotation speed of 1000 rpm it developed a rated power of 1200 hp. The engine was started by the starter. The shaft of a diesel engine through a unified hydraulic transmission UGP 800-1200, cardan shafts and axle two-stage gearboxes was associated with wheel sets. It is noteworthy that the hydraulic transmission applied in the TGM5 diesel locomotive differs in design from the hydraulic transmission with the same designation applied in the diesel locomotives of the TGM3A series. The fan of the refrigerator had a hydrostatic drive, and the compressor PK-35 was hydrodynamic (with a variable-speed hydraulic clutch). The locomotive was also equipped with a 32TN-450 rechargeable battery charged from the P-51 generator.

The fate of locomotives

After the factory tests, the diesel locomotive TGM5-001 entered for shunting and hump works at the station Bryansk II. In 1967, one of the sections of the locomotive underwent traction and operational tests on the VNIIZhT experimental ring. In 1969, the TGM5-002 two-section diesel locomotive was built, which entered the South-Western Railway. All four sections built were excluded from the inventory of the Ministry of Railways in 1972.