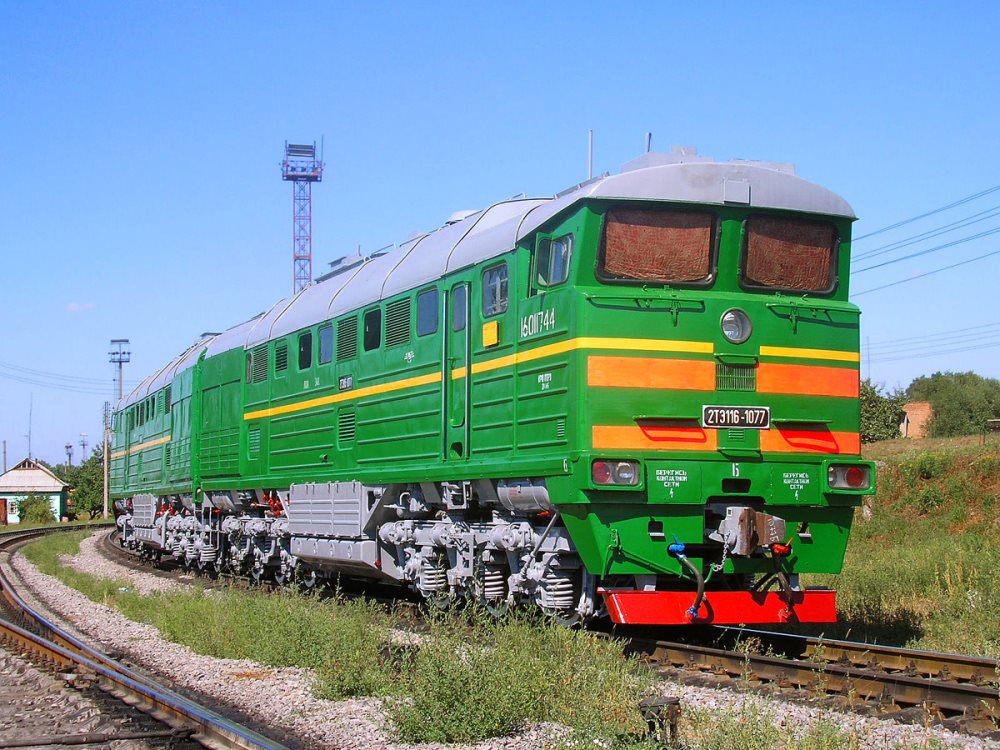 One of the most common freight diesel locomotives in Russia and the post-Soviet countries. The railroad also received the nickname “Hunchback” (for the characteristic shape of the roof), “Fantômas” and “Boeing”.

The main two-section diesel locomotive 2TE116 with a power of 2 × 3060 hp, intended for the cargo service on the USSR railways, was created by the diesel locomotive plant named after October Revolution (Voroshilovgrad), together with other enterprises: diesel locomotive building plant them. Kuibyshev (Kolomna), the plant for transport engineering them. Malysheva, “Electrotyazhmash” them. Lenin, “Elektromashina” (Kharkiv), as well as sectoral institutes of diesel locomotive engineering (VNITI) and the Ministry of Railways (Central Research Institute of Railway Transport Ministry). 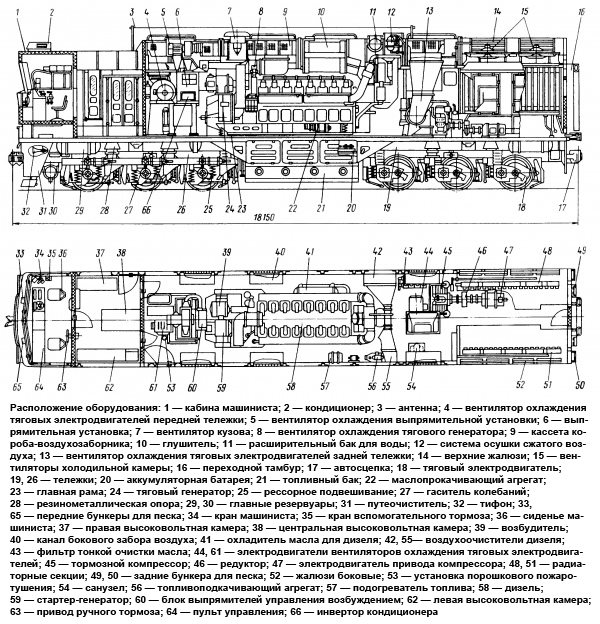 2TE116G – gas-powered diesel locomotive. It consists of three sections – two diesel (with cabs, as in the usual diesel 2TE116) and one cryogenic – with a gasifier (without control cabs). The diesel locomotive used 1GDG gas-diesel generator with electronic control, regulation and protection of diesel engines (SKRZD-3), additional systems for water and gas supply, control of gas equipment, control and protection, alarm, gas activation (shield-2-1 ), ventilation of electric compartments and gas equipment compartment, remote uncoupling of diesel sections from cryogenic. Built in 1988.

2TE116M is a modification of the diesel locomotive 2TE116 (in particular, 2TE116M-140, 316, 317), during which a rheostat brake was installed, which was subsequently installed on serial versions 2TE116 and 2TE116U. The electric circuit of this diesel locomotive is characterized by the preservation of the power of three-phase asynchronous electric motors of auxiliary machines from the traction generator and during electric braking, as well as control of the electric braking mode using the automatic braking control system (CART). The system allows, in particular, to automatically maintain a given speed on descents.

2TE116UP – passenger-cargo modification, in 1996 was built a single copy. The power of the diesel engine is increased to 3600 hp, the diesel locomotive is equipped with a rheostat brake and an electric heating system for the train. The traction unit consists of a traction and auxiliary synchronous generators mounted in one housing. An auxiliary generator through a rectifier provides power to a passenger train with a voltage of 3000 V DC with a capacity of 575 kW from each section in nominal mode. The thrust force of the long-term regime is 2 * 323 kN (2 * 33 tf), the design speed is 120 km / h.

2TE116U – “advanced”. Modification of the 2TE116 locomotive for the Russian Railways, equipped with a new cabin (of the type 2TE126 / 136) with the installation of air conditioning, with resistive braking, with an increased diesel output of 3,600 hp and microprocessor control and diagnostics system (MSU-TP). Tests of a three-section diesel locomotive 3TE116U-001 on the Kondrashevskaya Novaya – Novosvetlovsky stretch (Ukraine)

3TE116U – three-section version 2TE116. The structure has an intermediate section, in which the head part has a control cabin of a simplified design with an intersectional transition.

2TE116UM – modification for Mongolia with an improved charge air cleaning system and an increased power of diesel engines. Has its own numbering, started again from 001. Built 31 copies. It is worth noting the diesel locomotive 2TE116U-0062 from increased to 4100 hp power of diesel engines produced for the Mongolian railways. Due to this change, the rear part of the roof of the sections is slightly modified; the locomotive received the additional nickname “two-humped”.